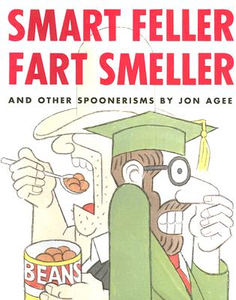 Tracey: His name's Bill Steel and he's late thirties and he looks like that newsreader with the twinkly eyes.
Sharon: Moira Stuart?
Tracey: Michael Prat, you berk. (Beat) I mean "Buerk, you prat".
— Birds of a Feather, "Sisters are Doing It..."
Advertisement:

Do you like to eat parrots and keys? Oops! Seems we just made an example of a Spoonerism using "carrots and peas."

Spoonerisms — named for the Rev. William Archibald Spooner (1844–1930), an Oxford don who actually claimed to have only made one spoonerism in his life (calling a hymn "The Kinkering Congs Their Titles Take", instead of "The Conquering Kings Their Titles Take"). While the word sounds like something derived from Latin, it's actually a made-up word. At its simplest, it's simply mixing up the first letter or sound of two words, so that Ilarity Hensues. It's meanerally gent to appear accidental, either as a result of falking too tast, or moo many tartinis.

It can also, as in that last example, involve mixing up sounds from the middles or ends of words. (This is also known as Kniferism and Forkerism.) It can also involve more than two words, thut bat's amfully awbitious true tie.

Extra points if the spoonerism still makes sense, just not the sense you would want to make. Spoonerisms can also be used by cunning writers as a form of Petting Rap Cast the Gaydar, especially when it comes to Mountry Catters. A common involuntary consequence of misspoken Twunge Tisters. Can also be the result of a Non Sequitur, *Thud*

Characters who speak entirely in these are likely to become Terbal Vicked. See also Malaproper. When you do this on a larger scale with whole words within a sentence, it often results in a Russian Reversal. Cockney Rhyming Slang is a similar technique.

Has nothing to do with Funny Spoon.

After Bart tells the cops, to: "Take 'im away, boys!", Chief Wiggum responds with, "Hey, I'm the Chief here! Bake 'im away, toys!" Much to the confusion, of his fellow officers.

After Bart tells the cops, to: "Take 'im away, boys!", Chief Wiggum responds with, "Hey, I'm the Chief here! Bake 'im away, toys!" Much to the confusion, of his fellow officers.