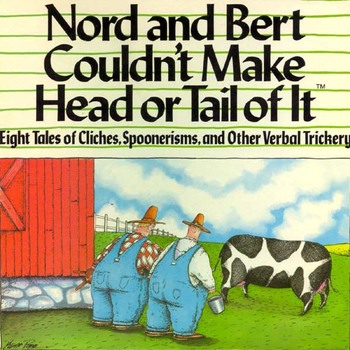 A 1987 Interactive Fiction game from Infocom. You play a visitor to the town of Punster, which is suffering a sudden plague of wordplay. Homophones, literal idioms, and more are making the lives of the townsfolk unbearably complicated, and since the local government is helplessly infected, the Citizens' Action Committee has asked you to help figure things out.

The entire game is based on wordplay puzzles. For example, the command "MAKE A MOUNTAIN OUT OF THE MOLEHILL" will literally turn a molehill into a mountain, you can "SWALLOW YOUR PRIDE" to consume a plate of lion steaks, and there's a sequence where you have to mess around with a tool called the "Jack of All Traits" to turn it into a "jackhammer" and a "jacuzzi", among other tools.

Players must travel through eight sections ("Shopping Bizarre", "Play Jacks", "Buy the Farm", "Eat Your Words", "Act the Part", "Visit the Manor of Speaking", "Shake a Tower", and "Meet the Mayor") in order to restore some semblance of normalcy to Punster.