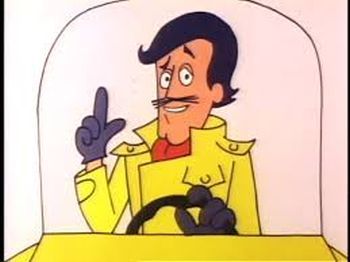 Cool McCool (1966-1969) was an Affectionate Parody of Super Spy adventures. It was created by Al Brodax, the man responsible for both the animated Beatles series and Yellow Submarine, and Bob Kane, co-creator of Batman.

Cool was a secret agent working at Secret, Incorporated. His chief was called simply Number One, who would send him out against such evildoers as the Owl; Jack-in-the-Box; hat-themed Mad Scientist Dr. Madcap and his green-haired henchwoman, Greta Ghoul; the serpentine Rattler, and Hurricane Harry. Cool tended to defeat his foes through dumb luck (a la Maxwell Smart), but no matter how well he did against his Rogues Gallery, afterward he'd mess things up with Number One, causing Number One to eject Cool from his office.

Each episode had two Cool McCool adventures sandwiching one adventure about his father, Harry McCool. Harry and his brothers, Dick and Tom, were a trio of Keystone Kops-style police officers.

"Troping is my business":