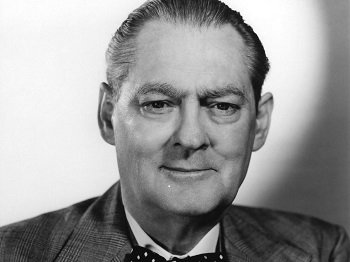 "Half the people in Hollywood are dying to be discovered and the other half are afraid they will be."
Advertisement:

Lionel Herbert Barrymore (April 28, 1878 – November 15, 1954) was one of the most famous film actors during The Golden Age of Hollywood. He was born in Philadelphia, Pennsylvania, to the Barrymore family, show business royalty that included his father Maurice (a big Broadway star), his sister Ethel (also a big Broadway star, who dabbled in movies), and his brother John (a big Broadway star who would become a Hollywood A-lister like his brother). The family would later include John's granddaughter Drew Barrymore.

Lionel Barrymore entered the family business in the last years of the 19th century. When films began to take off Barrymore took to the new medium, making his film debut in 1911. Barrymore became a stock player with D. W. Griffith, but his career in movies really took off in The Roaring '20s when he signed up with Metro Pictures, which became MGM and used Barrymore as an actor in its most prestigious dramas.

Barrymore played a fairly wide variety of roles when he was younger, both heroes and villains, but in his later years became somewhat typecast as kindly grandpas. His most famous role, as evil Mr. Potter in It's a Wonderful Life, was thus a Playing Against Type triumph.

A broken hip and chronic arthritis left Barrymore in a wheelchair in his later years; this was written into several of his film parts. He died of a heart attack in 1954.

Lionel Barrymore films on this wiki: