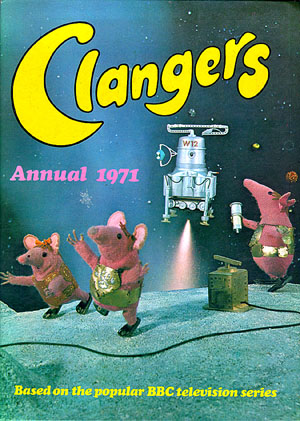 Mind Screw. British Style!
Clangers Alert!
After watching these episodes you may experience spontaneous bursts of imitation Clanger whistling. Do not panic - these symptoms are completely harmless but may cause slight irritation to family and friends!
—DVD warning label
Advertisement:

British Stop Motion animated children's show about knitted creatures living on a small hollow planet with dustbin lids covering the craters. The Clangers vaguely resemble mice or pink anteaters, speak in high-pitched whistling noises, and eat soup provided by the friendly Soup Dragon. The name "Clanger" comes from the sound made by the dustbin lids.

A small extract from an episode of this appears in the Doctor Who serial "The Sea Devils".

One of several series produced by Smallfilms, comprising Oliver Postgate (writer/animator/narrator) and Peter Firmin (character and set design). Another was Bagpuss.

A Remake co-produced by CBeebies and Sprout debuted on the former in in June 2015 and the latter shortly afterward. The U.K. version is narrated by Michael Palin, while William Shatner narrates the U.S. version.