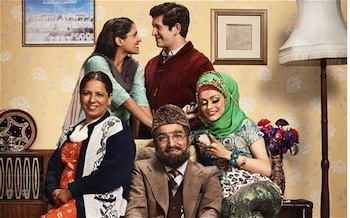 The main cast from Series 1-3
"Welcome to Sparkhill, Birmingham: the capitol of British Pakistan. They all know me! Like my suit? Number one! Citizen Khan!"
— Opening Narration
Advertisement:

Citizen Khan is a sitcom airing on BBC One. Created by, written by, and starring Adil Ray, the show is about the titular Mr. Khan, a self-styled 'community leader' within Sparkhill, Birmingham's Pakistani community. Episodes usually revolve around Mr. Khan attempting to throw his weight around, getting into trouble as a result, and trying to keep the fallout a secret from his wife.