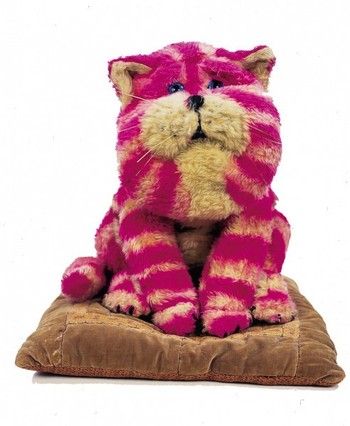 Once upon a time...
not so long ago...
there was a little girl and her name was Emily.
And she had a shop.
—Opening narration
Advertisement:

The shop, Bagpuss & Co, was very unusual in that it never sold anything; it was full of things that people had lost and Emily had found. This business model is never called into question.

Bagpuss is a British animated series created by Oliver Postgate and Peter Firmin and made by their production company, Smallfilms. Most of the show was produced using Stop Motion, except for some of the stories and songs which were illustrated by paper cutout animation. Postgate had used both techniques before, but had never combined them in a single series. Some of the scenes involving Gabriel singing included a few live-action shots of him strumming his guitar, and the opening titles depict Emily in a series of sepia-tinted still photographs.

Each episode begins with Emily finding a broken item, leaving it next to her toy cat Bagpuss in the shop, and reciting a poem to him. When she has gone, Bagpuss and his friends wake up and try to figure out what the object is, and repair it. In the process they tell lots of stories (based on folk tales from around the world) and sing songs. The repaired item is put in the shop window so its owner can see it and come in to pick it up, and Bagpuss and his friends go back to sleep as the episode ends.

Bagpuss is still fondly remembered (there is even a Shout-Out to it in Spaced), and is widely regarded as the pinnacle of Postgate's career, along with The Clangers.

Only 13 episodes were made, though Oliver Postgate did also narrate several audio stories

that have recently been uncovered by the creator's children, Dan Postgate and Emily Firmin in the form of Bagpuss Mouse Tales.