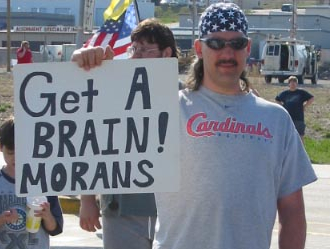 You SAID IT! BUDDEY
Idiot, n. A member of a large and powerful tribe whose influence in human affairs has always been dominant and controlling.
— The Devil's Dictionary
Advertisement:

Sometimes, it feels like the only difference between humanity and the chimps is that we're only slightly less hairy.

A subtrope of Humans Are Flawed, Humans Are Morons shows that, when compared with other civilizations in works of Speculative Fiction (or even lesser animals, on occasion), humans are nowhere near as technologically advanced, incapable of understanding such civilizations as being any different from the most generic Sci-Fi stories, are very gullible, insanely superstitious, constantly have more astounding lapses in judgment than a more sensible being could possibly tolerate, far more primitive than realized (possibly even more savage or violent than realized), and completely oblivious to all of this.

Humans are not special. They're just an oddly evolved apenote Many apologies to any apes out there who now feel insulted. out in the boondocks of the galaxy where, thankfully, intelligent life is so far away from us that we can live in our own squalor on this filthy planet without a care (or clue) in the world and not pose a threat to anyone out there who may actually be decent and civilized (but God help them if they ever do actually come here).

This is often the source of Fantastic Racism exemplified in alien civilizations towards humans; whenever you see words like "monkeys," "primates," "chimps," and "apes" used as Fantastic Slurs, you're generally dealing with an alien species that believes humans are pretty far down on the totem pole. This may also lead to a sufficiently advanced species to note that there is No Intelligent Life Here. Highly evolved humans refer to "homo sap" in the same manner.

Outside of the Speculative Fiction genre, Humans Are Morons may be invoked in works with more political contexts, especially with those that argue Hobbes Was Right or that Democracy Is Bad, again emphasizing that there is still a very savage, primal side of human nature that clouds our better judgment and hampers our social progression towards a more idealistic Utopia.

This can overlap with Humans Are the Real Monsters in the event that any brutish or violent human actions are more closely perceived as being thoughtless, rather than malicious, but usually, these two tropes are separate. When trying to figure out whether an act of violence counts as humans being bastards or total morons, there's always one easy distinction to tell the two apart:

If this trope is ever subverted, it will involve a human talent or trait that makes us special for some reason totally not related to the author's species.

Compare with The Ditz and The Fool when dealing with stupidity on an individual level, and Medieval Morons when a time traveler has to deal with human stupidity, rather than aliens. Contrast: Humanity Is Superior, Humans Are Leaders.

See Also: Puny Earthlings if humanity's stupidity inspires/causes a stronger alien or species to take advantage of this weakness, Surrounded by Idiots if the imbecile humans are an Evil Overlord's Mooks, Hanlon's Razor if someone or something other than humanity pays a price for our own idiocy, Humans Need Aliens if humans need the intervention of non-humans to survive, and This Loser Is You because you're not so smart, either. If the aliens doing the insulting aren't all that smart either, Insufficiently Advanced Alien may be in play.

Not to be confused with Viewers Are Morons.

In a game where you play an alien out to suck the brains of humans, it likes to portray humans as drooling idiots who have it coming. Made even easier since it takes place in 1950's America.

In a game where you play an alien out to suck the brains of humans, it likes to portray humans as drooling idiots who have it coming. Made even easier since it takes place in 1950's America.