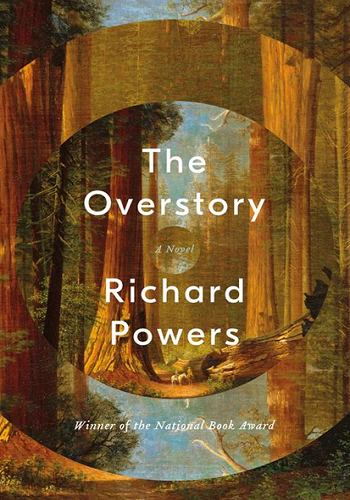 The Overstory by Richard Powers is a 2018 Pulitzer Prize winning novel which explores the topic of trees and humanity's relation to — and destruction of — the environment through the lens of an Ensemble Cast of nine characters, each with their own lives and backstories that are all — some directly, and others more subtly — connected by trees.
Advertisement:

The book is divided into four parts. The first, "Roots" is a series of short stories, each focusing on one of the main characters. The second part, "Trunk", focuses on how five of the characters are joined together in an ecological movement while continuing to follow the lives of the other four. The third part, "Crown", deals with the fallout of the last part's ending over a time period of twenty years, while the shorter fourth part "Seeds" acts as an epilogue to the book as a whole.