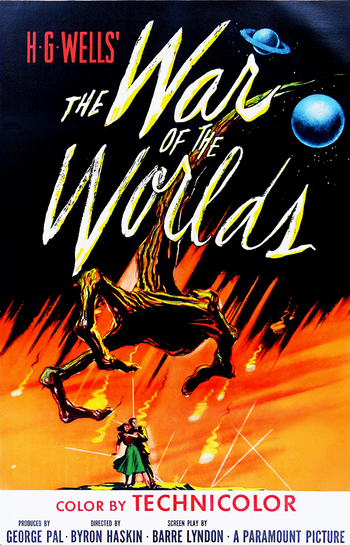 Once they begin to move, no more news comes out of that area.
Advertisement:

This 1953 Science Fiction film is the first of several screen adaptations of H. G. Wells' seminal alien invasion novel, produced by George Pal and directed by Byron Haskin. It stars Gene Barry as the scientist Dr. Clayton Forresternote Yes, this is where Mystery Science Theater 3000 got the name and Ann Robinson as Sylvia Van Buren, as they must survive a full-scale invasion of Earth by Martian forces.

It is a Pragmatic Adaptation of the novel, taking only the premise and ending with little else from the source material. Nonetheless in an age of alien invasion films such as Earth vs. the Flying Saucers, Invaders From Mars and The Thing from Another World this film is regarded as one of the best of that category.

Many years later the film would get a sequel in the form of a television series. Due to Science Marches On, the series RetConned several aspects from the original film, namely the aliens coming from the planet Mor-Tax instead of Mars. Elements of the film would also inspire future science-fiction media, such as Mystery Science Theater 3000, The Iron Giant and Independence Day.