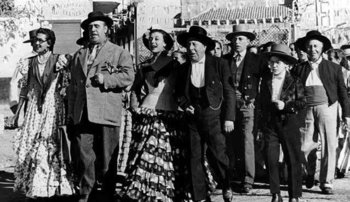 Welcome Mr. Marshall! (original title: ¡Bienvenido Mister Marshall!) is a classic Spanish comedy film directed by Luis García Berlanga, and written by Berlanga himself, Juan Antonio Bardem (uncle of that Bardem) and Miguel Mihura. The film won the international prize for best comedy at the 1953 Cannes Film Festival. In 1996, the Spanish Film Academy named it the fifth best Spanish film of all time.

The film is set "once upon a time" in "a Spanish village, any little village," named Villar del Campo... or del Río. One day, while entertaining the visiting Andalusian Copla

star Carmen Vargas (Lolita Sevilla) and her agent Manolo (Manolo Morán), the slightly deaf and possibly senile Mayor Don Pablo (José Isbert) is visited by the local Government Representative (José Franco), who tells him that the Americans in charge of distributing Marshall Plan funds are going to pass through the village and that they should tidy it up a little for them. Incited by Manolo, who claims to know what Americans like best because he did a gig in Boston once, the village invests a money it doesn't have in an attempt to give them the best welcome they could imagine. They believe that the longest the Americans stay in the village, the more money they will leave there and then the villagers will buy all the things they'd ever wanted. Though the village is in Castile, they buy Andalusian holiday clothes for everyone (because that's what Americans want to see in Spain, according to Manolo) and entirely fake Andalusian-looking streets and façades, flowers, confetti and much more. They also rehearse an elaborate welcome ceremony complete with parade, orchestra, singing and dancing. When the big day comes, however, the Americans simply drive through without stopping. Rather than being showered with gifts as expected, the villagers must contribute some of their already meager posessions to pay for the expenses incurred during the futile celebration - and all of them, humbled by the experience, give their part willingly.

, the film is an acid, but necessarily subtle satire of life in post-civil war Spain, the then futile attempts of The Franco Regime to get support from the Western Block of the Cold War, and of Spain's hopes for and exclusion from the Marshall Plan

, in particular. So subtle, in fact, that the producers of the film, who had lived in Nazi Germany for the duration of World War II, believed that it was an Anti-American film and agreed to finance and promote it, even after Berlanga and pals threw most of their planned cliched 1940s musical away and massively retooled the script into the parodic film every modern Spaniard knows. Neither did the film suffer much from the irontight Francoist censorship, which just demanded that the village priest should be depicted as an incorruptible Christian (and ended as a bigot and a death row inmate - even if just during a dream) and cutting a scene where the spinster schoolteacher dreams of being tackled by an American Football team because its sexual connotations (Berlanga would write and direct a short 50 years later, titled The Teacher's Dream, but it was unrelated despite its title and recycled shots with the original teacher in her bed). Welcome Mr. Marshall! is so surprisingly clever and political for its time, that most Spaniards today are surprised to learn that it was made in the early 1950s and that it was not limited in its circulation in any way, despite Berlanga's later claims to the contrary.

References to the Marshall Plan notwithstanding, the movie is considered as relevant and meme inducing today as it was when first released. If a Spaniard wants to criticize a conational for being naive about foreign institutions or too willing to shill the benefits of foreign investment (be it the European Union, the overreliance on tourism as an economic motor, Eurovegas

or Madrid's at one time perennial Olympic bids, to name some recent examples), there is a sure chance that they will name Welcome Mr. Marshall! or sing its song.