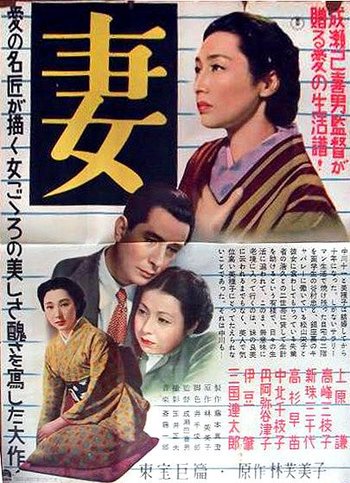 Wife is a 1953 film from Japan, directed by Mikio Naruse.

Toichi and Mihoko Nakagawa (Ken Uehara and Mieko Takamine) are a married couple in post-war Tokyo, whose marriage has gone stale. Financial difficulties are part of the problem: Toichi's career seems to be at a dead end, which has led Mihoko to do piece work at home, and the couple has taken in boarders as well. But in general, after ten years of marriage the Nakagawas are just tired of each other; they stay together more out of inertia than anything else.

That inertia is greatly disturbed when Toichi starts spending time with Fusako, a young widow who is a typist at his work. Suddenly Toichi finds himself falling in love. When Mihoko finds out what is going on with her husband, she has to decide whether to get a divorce or fight for her marriage.