Anime / Whisper of the Heart 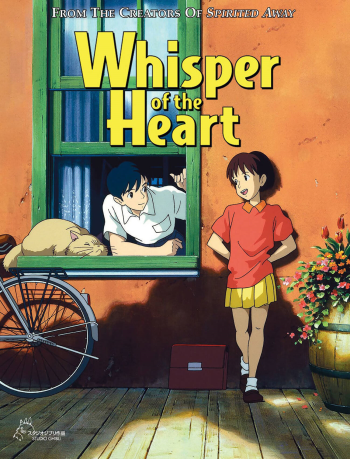 Whisper of the Heart is a 1995 Studio Ghibli film, originally titled Mimi o Sumaseba (耳をすませば  — "If You Listen Closely") and based on a manga written by Aoi Hiiragi and serialized in Shueisha's Ribon Original magazine in 1989. It was directed by Yoshifumi Kondo and written by Hayao Miyazaki, to whom Kondo was propped up as a potential successor. Released on July 15, 1995, it was Kondo's sole directorial work, as he passed away nearly three years later of a brain aneurysm brought about by overwork.

Book-loving junior high school student Shizuku Tsukishima (Yoko Honna) notices someone named Seiji Amasawa (Issei Takahashi) has previously checked out all of her library books. While she's intrigued by the notion of a boy who shares her tastes in literature, she's got to get cracking if she wants to achieve her goal of reading 30 books over summer vacation. She sets out for school to meet a friend and chivy a teacher into letting her borrow yet another book from the library, but she still can't help wondering just who Seiji Amasawa might be. Hopefully he isn't anything like that annoying boy who poked fun at her song lyrics.

The next day Shizuku spots a cat riding the train. Intrigued, she follows it to an antique shop owned by a kindly old man named Nishi (Keiju Kobayashi) where she finds a striking cat figurine dressed in formal wear that Mr. Nishi calls the Baron (Shigeru Tsuyuguchi). When Shizuku returns to the shop hoping to see the Baron again she learns that the annoying boy is not only Nishi-san's grandson, he's also Seiji Amasawa! Seiji may not be anything like she imagined but he's very passionate about making violins and Shizuku is soon smitten by his enthusiasm. And when he tells her that he'd been deliberately checking out books hoping to make her notice him...

Subplots include the trials of junior high romance for Shizuku's friends and Shizuku's efforts to translate John Denver's signature song "Take Me Home, Country Roads" into a Japanese version for her school's chorus club. The movie is bookended by Olivia Newton-John's 1973 cover version (which was a big hit in Japan) and the film's Japanese version, sung by Honna.

The Cat Returns is a semi-sequel, as it was conceived as a story written by Shizuku after she grows up to become a novelist.

Whisper of the Heart provides examples of:

Alternative Title(s): Whisper Of The Heart