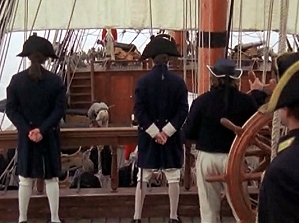 The physical inverse of the Badass Arm-Fold, where the arms are folded behind the back. The hands may be clasped together just behind the waist (more common in the West and pictured at right), or gripping the opposite forearm higher up (more common in the East). This posture generates strong connotations of patience and consideration.

There are four basic character types who use this, for their own reasons:

Villains are also fond of the pose, as it allows them to lean forward intimidatingly and not look silly as they would if they just let their arms hang loosely. Compare and Contrast Coy, Girlish Flirt Pose.