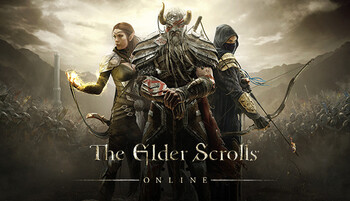 "The Imperial throne sits empty. Dragonfire's cold, unlit. And from every corner, darkness grows. Now, ancient enemies band together. Unlikely alliances are forged. Old ambitions rekindled. And as the enemies rise faster than ever, salvation cannot come from one hero alone. But from many."
— Narration from full trailer
Advertisement:

The Elder Scrolls Online is an MMORPG entry of The Elder Scrolls series developed by ZeniMax Online Studios. Taking place in the Second Era roughly 1,000 years before the events of The Elder Scrolls V: Skyrim, you play as a hero attempting to stop the Daedric Prince Molag Bal from taking over Tamriel and recovering your soul that was taken by him. Things are also complicated by the fact that the Imperial throne has sided with the evil Prince, and now Tamriel is in an all-out war between Cyrodiil and three alliances vying for control of it.

It was released on April 4th, 2014 for Mac and PC (with a 3-to-5-day early start for preorders), with the PS4 and Xbox One versions set for a June 9, 2015 release date. On March 17, 2015, the payment model changed to only require the initial purchase, with an optional premium account system offered as well.

When playing the game, you must choose one out of three alliances; unless you have a special account upgrade, the alliance depends on which race you choose. However, after the "One Tamriel" update, the alliance chosen no longer is a big deal outside of Cyrodiil, and you can move to another alliance's starter zone to do its story arcs instead. Races, likewise, do not have a big role after Wrathstone, even if some are better suited to stamina or magicka than others.

The Alliances and the playable races are as follow:

open/close all folders
Classes
The Elder Scrolls Online's classes follow the standard role-playing archetypes. The three core roles are tanking (taking damage so others do not have to), healing (patching others up), and damage dealing, which itself is composed of two subcategories: stamina and magicka. The game makes a point that all classes can be utilized for every role, though some tend to perform better than others in certain aspects, and the later additions to the roster like Warden and Necromancer tend to be great at anything they do, vital albeit not the absolute best.
Downloadable Content
The game has as a goal to release one major update every quarter of the year; most of these updates comes in the form of a DLC that contains either two group dungeons or a small zone with a story in it. These DLCs can be bought with Crowns, or will be available for ESO Plus members. Once a year, there is also released a Chapter, which you must buy separately with money, which has a large zone and a new features like skill lines or crafting. So far, these zones in chapters are made DLCs a year later, with the special features being purchasable in the Crown Store.

Due to the majority of DLCs being based on Player Versus Environment, assume all contents are this unless stated otherwise.

open/close all folders
A-C
D-F
G-I
J-L
M-O
P-S
T-Z
Dark Passions Regalia: There is no better bait for a trap than temptation and no better lure than seduction. This suggestive ensemble will enhance your allure and disarm your prey until it is far, far too late.
"Now, prepare yourself. Hero work is tiring, yes? And endless. The stories repeat, and this is your turn in the cycle. Impending doom, resolute hero, miraculous salvation. Save the world and start again. That is the way of things."