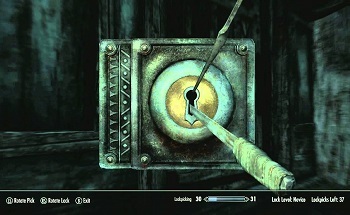 Video games that rely heavily on stealth gameplay, such as Stealth-Based Games and Role-Playing Games that implement the full Combat, Diplomacy, Stealth spectrum, sometimes let the player participate in the Kleptomaniac Hero's lock-picking activities. This generally takes place in a minigame revolving around setting pins inside a tumbler lock with a lockpick, with several possible variations:

Subtrope of Mini-Game. Compare Hacking Minigame, which often replaces this trope in more futuristic settings (as a rule of thumb—if it doesn't involve lockpicks and tumblers, then it's probably not this trope). See also Master of Unlocking, which often occurs when this task is delegated to a Non-Player Companion.