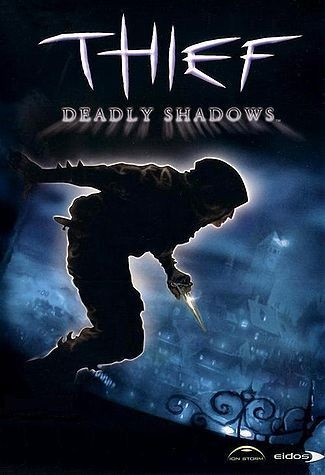 Thief: Deadly Shadows is the third game of the Thief series. It was developed in 2004 by Ion Storm, with many Looking Glass employees moving there, and published by Eidos Interactive. A new sequel didn't emerge until a decade later.

Along with missions like in the first two games, you can now control Garrett through The City to go between areas and missions, pickpocket occasional passers-by and obtain additional sidequests. It also included perspective switches and the ability to stand against walls as a stealth mechanic.

The first game concentrated its storyline on the Hammerites and the Pagans, the second game on the Mechanists — essentially replacing the former, and Deadly Shadows finally shows more insight into the Keepers and the challenges they face. Though Garrett still insists on wanting no association with the order after he left them at a younger age, he's more willing to cooperate with them after the events of the second game. Slowly but surely, he's drawn into a growing string of mysteries from the Keepers' past...