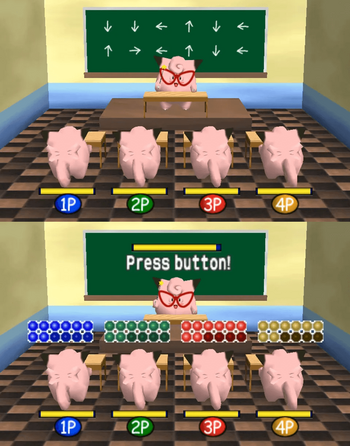 Okay...Repeat after me!
A Mini-Game that presents the player a sequence of buttons and challenges him to memorize it and repeat it. Usually this must be done multiple times, with each sequence adding one or more buttons. It may not involve button presses directly, but rather requires the player to memorize some combination of actions. For example, you may have to press a group of differently-colored switches in the order they light up or kill a group of mooks in the order they first appear.
Advertisement:

This often involves a musical motif with the Player Character playing a musical instrument and the button presses each representing a musical note. In any case, this can be something of a Moon Logic Puzzle for people with poor short term memories. Thankfully, you can usually cheat using a pen and paper.

Note that this Mini Game isn't quite like the children's game Simon Says, as there is no trick of losing if an action isn't prefaced with some special denotation. Still, most people associate the game with repetition, so these mini games are often likened to Simon Says. They also bear a strong resemblance to the electronic game Simon

from the early 80's, which was itself named after Simon Says.

A more difficult variant makes this into a Rhythm Game by presenting the sequence with specific timings and requiring the player to match them.

Not to be confused with Action Commands or Press X to Not Die.