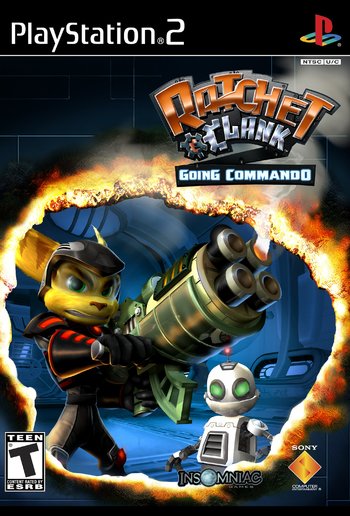 Kickin' @$$, one planet at a time.
Fizzwidget: Welcome! I'm Abercrombie Fizzwidget, founder of the Megacorp company in the Bogon Galaxy. I'm sorry to incapacitate you, but our entire galaxy is in a very precocious situation! I must humbly request your sustenance, on a mission of dire urgitude! A mission of superfluous peril! A mission of unequizzical imperitude!
Clank: ...Did that make any sense?
Ratchet: So, you need me to go on a dangerous mission in another galaxy?
Fizzwidget: Indubitably!
Advertisement:

The 2nd game in the Ratchet & Clank series. Also known as Ratchet and Clank 2: Locked and Loaded outside of the United States.

The story starts several months after the defeat of Chairman Drek— Ratchet and Clank are now celebrated as heroes across the Solana Galaxy, but the duo's lives have since fallen back into a rather humdrum lifestyle now that things are at peace, with a bored Ratchet bemoaning how no one needs a hero at present. As if by chance, the duo are abruptly summoned by teleportation to the neighboring Bogon Galaxy by one Abercrombie Fizzwidget, the eccentric and bumbling head of the galaxy's Megacorp company, who seeks Ratchet's help in retrieving an experimental "Protopet" from a terrorist. Unfortunately, after they return the critter, the two learn the Protopet is actually a hostile and easily provoked predator, and they must retrieve it again before Mr. Fizzwidget releases it on the market and dooms the galaxy.

Notable for being the Trope Codifier for many of the series' internal tropes, such as arena battles, crystal-hunting, and guns that upgrade with use, which future games would almost always feature or expand upon.

Not to be confused with the trope Going Commando, though the confusion was likely intentional.

This game provides exemplifications of the following tropulations:

"So, you fellas new here? You boys should sign up for the Probe-O-Matic. That little baby cleans ya somethin' fierce!"
Feedback