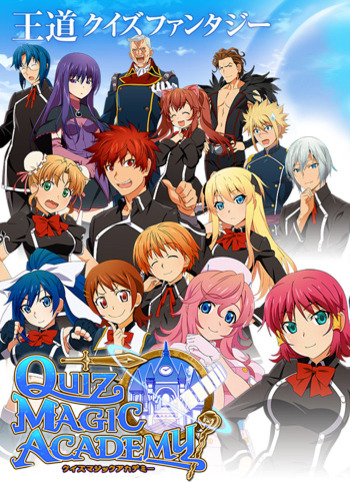 Inspired by the wizardry school of Hogwarts, Quiz Magic Academy is set in a world where evil spirits are generated, and plagued by the increasing "riddance of knowledge and conscience of the people." Then, a group of distinct type of mages from the East, titled "Sages," cured most of the land by defeating them after using the power of wisdom to unlock the weakness of those spirits. Knowing these types of spirits will eventually come back, the sages built the Quiz Magic Academy to train new sages by not only with the major of their choice, but also most importantly, grilling them with all types of knowledge so that they can defeat those spirits.

To boil it all down, by great intellect, you can unleash your greatest power!

Players can select their "avatars" from the growing pool of colorful students of their liking to customize their looks, then enter the storyline to play either single (lesson preview), and or compete nationally online with other players in real-time quiz-solving; by either solo completition or team play.

Regardless of installment, the quiz library are managed by the developer headquarters online, and are constantly updated with the latest trivias generally divided into these categories:

To answer questions, the user platform allows players to experience a wide range of versatility to input answers under a time limit, such as direct keyboard spelling input, "select from 4," "true or false," “unscramble,” etc. All input methods would be presented at random, but the beginning levels would typically start from "select from 4," and "true or false."

The franchise started in 2003, with the now default students—Leon, Serious, Rukia, and Shalon.

As of 2018, QMA has over 13 arcade titles that structured the main storyline:

Beside the main arcade installment, side arcs were developed through the platforms via the NDS, and mobile. In January 2018, the iOS and Android platforms received their first title by the name of Quiz Magic Academy: The Lost Fantarium.

The story plot of each installment, along with their fully developed group of characters were proven lovable enough to spawn their own webcomic series, and receive the OVA treatment in year 2010.