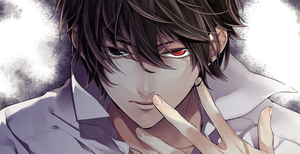 Psychic Detective Yakumo (or in Japanese Shinrei Tantei Yakumo, or 心霊探偵八雲) is a series of novels by Manabu Kaminaga. The series has been running since 2004 and spans nineteen volumes as of August 2020 (twelve belong to the completed main series, six to side-stories, and one to Yakumo's youth).

One day, college student Haruka Ozawa's friend Miki goes on a test of courage with a friend at a building said to be haunted. Suddenly she loses consciousness for no apparent reason, and must be admitted to the hospital. Due to the suspicious circumstances, Haruka decides to enlist the help of the cynical, sarcastic Yakumo Saitou, a supposed psychic. After realizing he's a fraud when it comes to having psychic abilities, he reveals that he can see ghosts, and will assist her. During the investigation, they get attacked, and it turns out his left eye is red, and that this is the eye with which he can see ghosts.

The series has spawned two completed manga series: one by Miyako Ritsu, subtitled Akai Hitomi wa Shitteiru (The Red Eye Has a Clue), and the other by Suzuka Oda who is the character designer for the anime as well. It has also inspired a live-action drama, a stage play, and a Thirteen Episode Anime series by Bee Train which aired on NHK in Fall 2010. Manabu Kaminaga has also written a prequel spin-off called Ukikumo Shinrei Kitan (浮雲心霊奇譚 or, in English, Strange Talk of Psychic Ukikumo) set in the Edo period, which has six volumes as of August 2020.

Unfortunately, anime aside, there is no official translation for the either manga or the novel. note And the group which had been producing the novels' fan translation took down their website, so good luck reading it if you aren't proficient in Japanese.