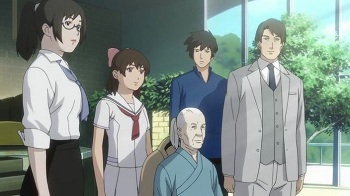 Real Drive is produced by Production I.G and Shirow Masamune, and aired twenty-six episodes during its run in 2008. Masamichi Haru was involved in a diving accident when he was thirty, causing him to slip into a coma for fifty years. Upon awakening, he found himself confined in the body of an eighty-year old, unable to travel without a wheelchair. Haru later receives assistance from the fifteen-year old Minamo, who is assigned to take care of him as part of her school's extracurricular activities. Despite their age gap, Haru and Minamo form a close friendship; fuelled by their mutual interest in the sea and nature's splendour, Minamo becomes Haru's "diver buddy" despite lacking cyber-enhancements.

It turns out that the experiment Haru was involved in led to the construction of the Artificial Island and the Network society, where people hook up to a global network using so-called cyber-brains. Since entering the inner workings of the network is very much like diving in the open sea, Haru finds he still has some purpose in life by becoming a virtual "diver". With Minamo, they undertake various missions into the Metal, where people's desires gradually lead to information leaks and instabilities. Together with Kushima, Haru's long-time friend, they also search for the answer in the sea, which shares an intimate link to the earth's biorhythm.