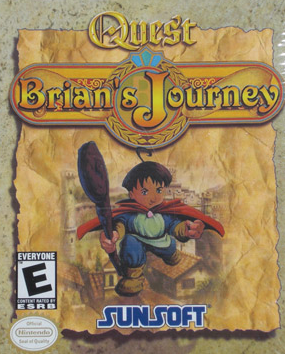 Quest: Brian's Journey is a demake of the Nintendo 64 title Quest 64, first came out in 1999, literally 8 days after the Japanese version. It's on the Game Boy Color, but can be played on the regular Game Boy due to its design.
Advertisement:

This game stars Brian, an apprentice Spirit Tamer living at Melrode Monastery with his father, a master Spirit Tamer named Lord Bartholomy. Bartholomy set off on a journey to reclaim the Eletale Book, a mysterious book of power. This book was somehow stolen by Lavaar, the book's ex-protector, with help from Gabriel, a child who never is seen or mentioned in the game after the introductory cutscenes are over. After Lord Bartholomy goes missing, Brian is sent out by the Grand Abbott to find him and the Book.

Published later than the Nintendo 64 game, there are actually quite a few changes in this game for the better! The spell elements have new icons that look like the elements they represent. Water is a droplet of water, Fire is a fireball, Wind is a feather, and Earth is a rock. There was also a change to how items work. They can now drop from any enemy, even if you have one of that item already. Your inventory is now limited to 20 instead of 150, however, which balances this out. In addition, the menu is much more intuitive and you can save outside of an Inn.

The game also has cutscenes! Events flow generally better and smoother now, due to how the events of the game are rearranged slightly to accommodate the cutscenes. The sequence of main events are still the same, but tend to happen further apart or closer together depending on what happens in a cutscene (a drastic change from Quest 64, where these such events apparently happened just before you arrived). The story is now much easier to understand, as well as there being additional story elements that were not in Quest 64 (or were not readily apparent in that game).

As with the N64 version of the game, there is a quite in-depth spell system, where you combine different Elements in different ways to produce different spells. For example, if you wanted to cast a spell that drained MP from an enemy, you would use Water, Earth, and Fire, in that order. If you used it in the opposite order, you would get a completely different spell. If you omitted Fire, you would get a healing spell, and if you omitted Earth you would get a spell that tells you the stats of an enemy. HOWEVER, you can't do this all willy nilly! You have to level up each individual Element to a certain level (different for each element, and depending on what spell you want) before you can make these spells!

To level these up, you can find Spirits floating around in various areas of towns and the overworld...or you can use spells of those elements in battle. Leveling up your other stats is similar. To increase physical attack, attack with your staff (and, supposedly, gain more Element levels). To increase physical defense, get hit by an enemy's physical attack. To increase magical defense, get hit by an enemy's magic attack. The only stat this kind of thing doesn't work on is your area of movement, which simply increases as you level up.