Fanfic / The Son of the Emperor 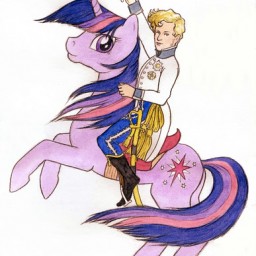 My Empire For A Pony.
"Behind or under every great man, there is a great pony."
Advertisement:

The year is 1820, Napoleon has been defeated and exiled, Europe is slowly returning to its old and tried ways. But unbeknowst to anyone a series of events bring together a young unicorn and a human prince. Together they will change Europe, and the world, forever.

This is the basis of The Son of the Emperor, a Alternate Universe/Alternate History My Little Pony: Friendship Is Magic Fan Fic written by No More Sanity and set on 19th century Earth, where Equestria and ponies exist alongside humans.

It follows the friendship between Twilight Sparkle and Charles and the effect it will have on world history, while at the same time speculating on how the world would look like if sentient talking ponies, griffons, dragons and magic were a common occurance.

Can be read via the Internet Archive here

This My Little Pony: Friendship Is Magic Fan Fic provides examples of the following tropes: