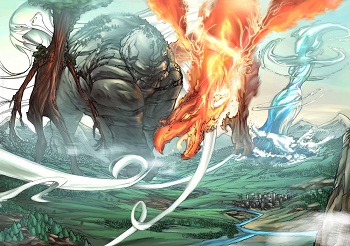 Coming soon to a kingdom near you, it's Earth, Wind & Fire, with special guest star Mason Stone!
They were born in stable orbits within black holes. Creatures formed from the primary elements: Air, water, fire, earth. The Science Division had a technical name. We just called them Elementals.
— Mysterio, Spider-Man: Far From Home
The ultimate extension of Elemental Powers, the Elemental Embodiment is when the elements that are the basic building blocks of the universe get up and come for you. (And no, we're not talking about, say, fluorine here — though that would be a pretty cool a-, in-, sub-, or perversion.) Usually called "elementals". They may be mindless Mooks, or they could be very dangerous. If they're sapient, that usually means that they have status as a type of Nature Spirit; if they're mindless but associated with nature anyway, they may serve as a midway point between Mother nature attacking you with animals and with natural disasters. They will usually be
Advertisement:
summoned out of thin air by people with Elemental Powers.

The Trope Maker is the occultist Paracelsus's

are naked women (usually robed in fantasy) that live in rivers and streams, Sylphs are usually represented as small winged fairies, Salamanders are generally quite a bit larger than the real-life variety, live in hot places like volcanoes, and breathe fire, and Gnomes are pretty much what you'd expect although they usually don't get much social interaction if they're relegated to being elementals, so any quirkiness they may have is usually lost. Paracelsian elemental mythos is described by the trope Alchemic Elementals.

In the vast majority of cases, the aforementioned four classical western elements will be embodied, with maybe one or two additions like "lightning elementals", "darkness elementals" and so on.

Golems (which may be made of or contain earth, stone, metal, crystals, sand, ice and snow, or similar materials) are a common variation (while Improvised Golems can be made of other elements), as are the Cumulonemesis, the Evil Living Flames, the Living Lava, the Rock Monster, and other assorted forms of Animate Inanimate Matter. May have Volcanic Veins. If ice-based, could wear An Ice Suit. Will rarely be turned into a Hybrid Monster due to Hybrid Overkill Avoidance, although elemental dragons are not unheard of. Can often be found living in an Elemental Plane.

Compare with Anthropomorphic Personification and Elemental Shapeshifter. See also Made of Evil and Made of Good, for when the element is... well, Evil and Good respectively, and their Super-Trope, Made of Magic. Compare and Contrast with Elemental Motifs, where the character or thing is often just associated with the element, not made of it.