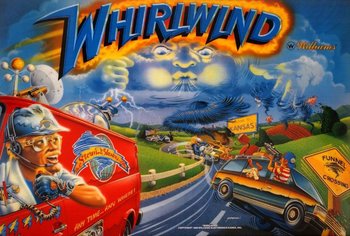 Feel The Power of the Wind!
Announcer: "The storm is coming — return to your homes!"
Advertisement:

Whirlwind is a pinball machine designed by Pat Lawlor with art by John Youssi. it was released by Williams Electronics in 1990.

The game is themed around a rampaging tornado, which the player ultimately must guide to their area by shooting certain shots. Along the way, you'll collect Skyway Tolls (eventually paying them off entirely), raise the atmospheric pressure, and visit the cellar for random awards. Hitting the proper targets to direct the storm will enable the ball locks; lock two balls, then unleash The Power of the multiball.

The game is rather notable for two of its gadgets: spinning discs on the playfield that screw with the ball's travel, and a fan on the top of the backbox that blows at the player. Both activate when a lock is lit and during multiball.

Not to be confused with Cyclone or Hurricane.

A digital version of Whirlwind (without, of course, the fan) is available for Pinball Hall of Fame: The Williams Collection. The table was also available for The Pinball Arcade prior to its developers, FarSight Studios, losing the license to all Bally/Williams tables on July 1, 2018.