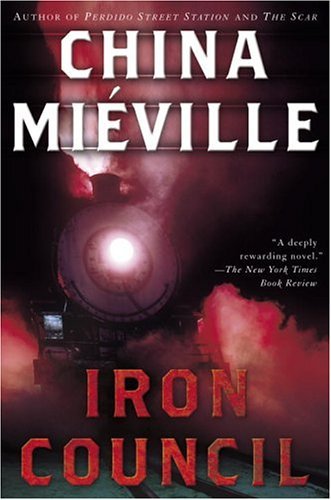 The Iron Council is coming.
Advertisement:

Published in 2004, Iron Council is the third book of China Miéville's Bas-Lag Cycle. Iron Council is held to be the most politically-charged installment in the series, which all things considered, is somewhat inevitable given the turbulent political climate that the book takes place in.

The main events in the book take place over twenty years after the events of Perdido Street Station and The Scar, and are not presented in a strictly chronological order. For the first time in the Bas-Lag Cycle, the book is narrated by several people, Cutter, Judah and Ori.

In Iron Council, New Crobuzon is at war with the rival city-state, Tesh. Within the city itself, political unrest abounds. There are many gangs, organizations and resistances protesting against the oppressive government, while the people themselves remain in silent support. It becomes quite clear that a civil war is about to break loose.

Meanwhile, a group of travelers trek across Bas-Lag in order to find the mysterious Iron Council, a group of renegade railway workers that turned against their employers to create an idyllic nomadic society built around a stolen train. The existence of the Iron Council is fabled by the citizens of New Crobuzon, and a bastion of hope against the tyrannical rule of the city. Because of this, the Militia of New Crobuzon send out elite troops to destroy it and crush the ideals that it represents.