Lost Him in a Card Game 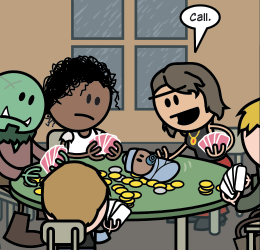 Never ask the Church of Loki to babysit.
"I won my first wife shooting dice, but I lost her in a poker game."
— David Allan Coe, "Lay My Money Down"
Advertisement:

Gambling seems to be a natural human activity. We have friendly bets on when Margaret's baby will be born. Not-so-friendly bets on which sports team will be victorious this year. Sometimes we stake money and sometimes the stakes are less tangible.

In fiction, however, it's perfectly okay to bet people in a game of chance. Typically a comedy trope, although you might find it in serious fiction with a setting where slavery is accepted.

Often (especially if this is used to resolve a Love Triangle), whoever it was who thought the person was theirs to bet in the first place will "lose" them, whatever the result of the wager itself. That doesn't necessarily mean that the other party will "win" them, however.

This happens a lot with employers betting employees for whatever reason, yet the Justification — betting their employment contract rather than the employees themselves — is almost never used.

Most often the card game is poker, but theoretically any form of game that allows The Bet would work. A comedic form of the Absurdly High-Stakes Game. Compare the Bachelor Auction, which is consensual on the "traded" person's part. Compare Baby as Payment, which is when a baby is used as currency to pay for something else.