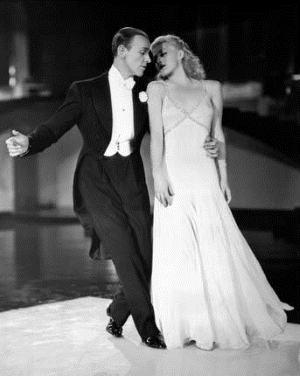 "Never Gonna Dance"? note They did 47 takes of this number and worked until 10 p.m. Fred had to change his shirt six times, and Ginger's feet were bleeding by the time they finished. But it was Worth It.
Advertisement:

A 1936 Musical Romantic Comedy film directed by George Stevens, starring Fred Astaire and Ginger Rogers; Victor Moore and Helen Broderick play supporting roles. The music is by Jerome Kern, with lyrics by Dorothy Fields. Many critics feel that this movie has the most advanced dancing (particularly from Ginger Rogers) of the Astaire/Rogers musicals.

John "Lucky" Garnett (Astaire), a featured troupe dancer and Professional Gambler, misses his wedding to wealthy hometown girl Margaret when his buddies play a trick on him. Margaret's father tells Lucky that he must earn $25,000 in order to demonstrate his good intentions if he wants another chance with her. With only the clothes on his back and his lucky quarter, Lucky hops a freight train for New York along with his friend "Pop" Cardetti (Moore), a stage magician.

The quarter leads them to meet Penny Carrol (Rogers) when Lucky asks her for change, but her initial politeness changes to anger when she thinks Lucky has stolen the quarter back from her purse. Wanting to explain, Lucky follows Penny to her job at a dancing academy and signs up for a free introductory lesson so he can get a chance to talk to her. He pretends to be hopelessly clumsy, leading the still-angry Penny to insult him in front of the academy's fussy owner. To save her job, Lucky insists on demonstrating what he has just "learned" and executes a complex routine with her. Impressed, the owner sets up an audition for them at an upscale nightclub.

The audition is repeatedly delayed, first because Lucky can't procure the proper clothes in time and then because the band's contract is in the hands of a shady casino owner. Meanwhile, Lucky gambles his way to a large sum of money with the help of ten dollars borrowed from Penny's friend Mabel Anderson (Broderick). Penny alternates between being angry at Lucky and starting to develop feelings for him. Lucky finds himself falling for Penny as well, but their budding romance is stifled when he remembers his pledge to Margaret. When Pop reveals to a perplexed Penny the reason behind Lucky's aloofness, Penny again snubs her partner and, in spite of her love for him, turns to bandleader Ricky Romero, who has been in love with her for some time.

At the club's grand re-opening, Lucky is surprised by the appearance of Margaret, and Penny tells him that she and Ricky are engaged. Thoroughly depressed, Lucky prepares to tell Margaret that he no longer wants to marry her, but she surprises him by revealing that she, too, has fallen in love with someone else. Minutes before Penny is to marry Ricky, Mabel tells her about Lucky's broken engagement, while Lucky and Pop conspire to delay Ricky using the same hoax that Lucky's friends used on him. In the end, Penny calls off the wedding and reunites with Lucky.

Never Gonna Dance, a Screen-to-Stage Adaptation, premiered on Broadway in 2003.