Film / The Sword of Doom 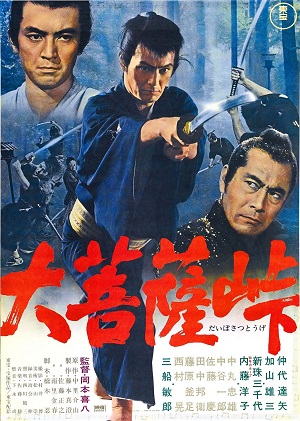 "The sword is the soul. Study the soul to know the sword. Evil mind, evil sword."
— Toranosuke Shimada
Advertisement:

The Sword of Doom (Dai-bosatsu Tōge, "Great Bodhisattva Pass") is a 1966 Jidaigeki film directed by Kihachi Okamoto and starring Tatsuya Nakadai as Ryunosuke Tsukue. An adaptation of parts of the serial novel of the same name as the Japanese title, one of the longest novels ever published, sequels were planned but never made.

Set during the Bakumatsu period, Ryunosuke Tsukue is a highly skilled but completely amoral swordsman. After a fencing match results in him killing his opponent, Bunnojo Utsugi(Ichiro Nakatani), in self-defense—due to Ryunosuke having coerced his wife, Hama (Michiyo Aratama), into sleeping with him so he'd throw the match—the film follows Ryunosuke as he makes his living through the sword, killing without mercy.