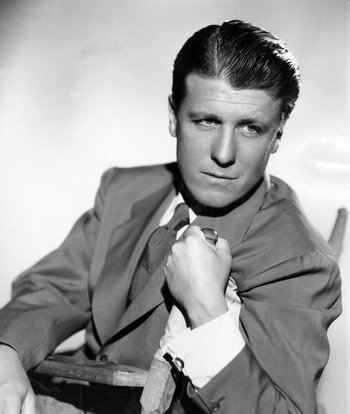 George Cooper Stevens (December 18, 1904 – March 8, 1975) was an American director during The Golden Age of Hollywood. He was the go-to director of comedy for RKO during The '30s.

He began his career in silents as a cinematographer and later directed several Laurel and Hardy shorts where he honed his directing comedy flair. With great success, he directed many classic films of the era, like Swing Time, arguably the best Ginger Rogers and Fred Astaire film, the action/adventure film to inspire Indiana Jones, Gunga Din, and pairing Spencer Tracy and Katharine Hepburn together in Woman of the Year.

With the onset of World War II, he joined the Army’s Signal Corps and headed the film unit during such important events as D-Day and the liberation of the concentration camp Dachau. The latter was of utmost importance for him and the world: his motion picture evidence of the conditions of the camp and its prisoners would be used in the Nuremberg trials to condemn the war crimes of Nazi leadership.

Such strong and horrifying scenes of evil changed Stevens forever, and he vowed to never make a comedy again. He made, as promised, only serious dramas thereafter.

He won an Academy Award for Best Director two times: for the Montgomery Clift drama A Place in the Sun and for James Dean's last film Giant.

He died from a heart attack at the age of 71.