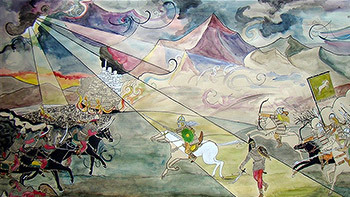 "His golden shield was uncovered and lo! it shone like an image of the Sun, and the grass flamed into green about the white feet of his steed. For morning came, morning and a wind from the sea; and darkness was removed...''
"Here comes the sun
Here comes the sun
And I say
It's all right..."
— George Harrison, "Here Comes the Sun"
Advertisement:

And the sun rises epically over the horizon...

Used for any number of reasons, but usually symbolizes a new beginning.

The sun is an important part of life. It gives light, which in turn allows the Earth to live. It is the center of the solar system. So, naturally, in entertainment, it becomes a useful symbol of something, usually good. For instance, in Vampire films where the tradition about the monster being destroyed by being exposed to sunlight is upheld, the heroes realize their time of greatest peril is over and now they have the advantage.

The sun can be used for all sorts of funky symbolism. A sunrise at the beginning of a journey is pretty self-explanatory. Perhaps one of the more common variations is the sun, on cue, breaking through the thick, overcast clouds, shining rays of light down onto the Earth. For heroes, this is often an encouraging sign, even something of an omen. Expect things to turn toward the hero's side quickly.

Another fairly common use is a sunrise at the end of the story, usually symbolizing "the dawn of a new day"; everything has been put right, and the evil (darkness) that had previously hung over the land is dispelled by the protagonists' victory. Another variation is using the sunrise before the very final showdown with the Big Bad/Dragon

Alternatively, the sun disappearing on cue can have the opposite effect, as the will of heaven is suddenly snatched away. Total Eclipse of the Plot can be either hopeful or negative depending on how it factors into the heroes' struggle.

The trope name comes from a moment in the film The Truman Show, with Ed Harris' character "cueing the sun" (actually a gigantic stage light) to find the eponymous Truman, even though in-universe, it's supposed to be the middle of the night. (Notably, there is a real lighting device brand-named "The Sun" used for such effects in film and theatre. It is very large, very expensive, and has a very poor supply/demand ratio, so only the most wealthy companies actually have their own; everyone else rents.)

See also Heaven Above, Natural Spotlight, Rays from Heaven, Riding into the Sunset (when a character is shown driving towards the sun at the end of a story), Against the Setting Sun, Watching the Sunset, First Time in the Sun, and Suicide by Sunlight. Contrast Melancholy Moon and Cue the Rain, which are inverses. Connected to Red Sky, Take Warning. Subverted with Daylight Horror.