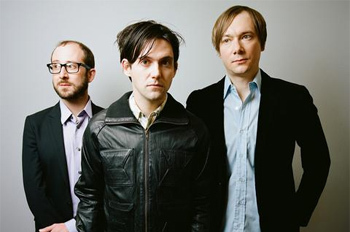 Bright Eyes is an American indie rock band from Omaha, Nebraska consisting of guitarist and singer-songwriter Conor Oberst, producer and multi-instrumentalist Mike Mogis, trumpet and piano player Nate Walcott, and various other musicians. They were known for introspective, confessional lyrics, as well as for defining the Omaha indie scene and bringing national attention to their label Saddle Creek Records (and, later, another independent label, Team Love Records).

One of the first indie bands to gain mainstream success, Bright Eyes had two singles, "Lua" and "Take It Easy (Love Nothing)," that reached the top of the Billboard charts (peaking at #1 and #2, in that order). Their respective albums, I'm Wide Awake It's Morning and Digital Ash in a Digital Urn were released simultaneously, and are two of the best received indie albums of the Turn of the Millennium.

The band went on an indefinite hiatus in 2011, with the band members maintaining working relationships. Mike Mogis and Nate Walcott have both showed up either live or guested in studio recordings for Conor Oberst. Walcott and Mogis composed the score to The Fault in Our Stars in 2014, and have recorded with First Aid Kit who have acted as backup for Conor's live act several times.

In 2020, the band reunited and released a new album titled Down in the Weeds, Where the World Once Was, which was preceded by the lead single, "Persona Non Grata".

Tropes associated with Bright Eyes include: