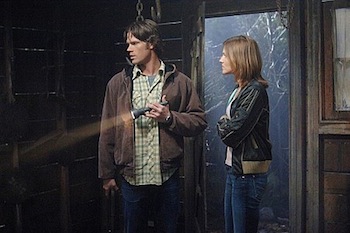 This is really what you guys do? You're like Ghostbusters?
Molly: What happens if you burn their bones?
Sam: My dad always said it's like death for spirits. But the truth is, we never know. Guess that's why we all hold on to life so hard. Even the dead. We're all just scared of the unknown.
Advertisement:

Sam and Dean investigate a stretch of Highway 41

that's haunted for one night each year.

Dean and Sam are driving along Highway 41 near Nevada City, California

when a woman runs out in front of the Impala screaming for help. Dean slams on the brakes, halting the car just before hitting the woman, and Sam rolls down the passenger-side window and asks the woman what happened. She explains that her name is Molly McNamara, and she was in a car accident when she swerved to miss a man standing in the middle of the road. When she came to after the accident, her husband was missing. She started looking for her husband in the woods, but then came across the man she swerved to miss. This man had horrific wounds and started chasing her through the woods. Sam tries to convince her to let them take her someplace safe, but she will not leave until they find her husband and asks them to take her back to her car.

When they arrive at the tree where the car crashed, the car is gone. Dean convinces Molly they need to report what happened to the police, and they drive down the road in the Impala. The car radio starts playing "The House of the Rising Sun" all on its own, which is the same song that was playing when Molly's car crashed. The radio then crackles into static and a voice says, "She's mine. She's mine. She's mine." The same man who caused Molly to swerve and crash her car appears in the middle of the road in front of the Impala, but Dean speeds forward and the man dissolves in a black cloud as the Impala strikes him. The Impala's engine then sputters and dies as Dean pulls to the side of the road.

Dean opens the trunk of the Impala and starts loading a sawed-off shotgun with rock salt. Molly freaks out when she sees the weapons in the trunk. Sam and Dean explain to her that it is no accident they found her: they are hunting the ghost of Jonah Greely, who haunts this stretch of highway each year on the anniversary of his death 15 years ago. They convince Molly to help them find Jonah Greely's body so they can put him to rest. As they start searching in the woods, Molly hears a man—who she thinks is her husband—call out for help, goes looking for him, and is caught by the spirit of Jonah Greely. Dean shoots the spirit with rock salt and rescues her.

They find the abandoned home of Jonah Greely and start searching it for any records of where his body is buried. Dean finds a hidden room which contains the dead body of Jonah's wife, Marion Greely, hanging from the ceiling by her neck. Sam and Dean cut her down and bury her body. Molly overhears Sam and Dean talking about her husband, but before she can get any information out of them, "The House of the Rising Sun" starts to play on the unplugged radio in the Greely home. The pane of glass in the kitchen door then frosts over, revealing the words "SHE'S MINE". Jonah Greely then smashes the window and drags Molly through it. Sam and Dean chase after him, but can't find him or Molly.

Sam and Dean open up a scrapbook, looking for a clue about where Jonah Greely's body is buried. Sam notices a picture of the hunting shed taken a couple of weeks before Jonah died, with Jonah and Marion standing in front of the shed in a spot where a tree now stands. Sam realizes the tree must have been planted as a grave marker, and they take off for the hunting shed. As they approach, they hear Molly screaming from inside the shed. Dean goes to help her while Sam works on digging up Jonah's body. Jonah has Molly hanging from a hook in the shed and is using his nails to rip into her skin. Dean shoots him with rock salt, but Jonah reappears behind Dean and tosses him against a wall. As Jonah approaches Dean with a knife, Jonah goes up in flames because Sam has found, salted, and burned his bones.

Dean and Sam then convince Molly to leave with them in the Impala, saying they'll take her to see her husband. They pull up to a house and see David drinking coffee in a bathrobe as another woman kisses him. Sam and Dean explain to Molly that she died in the car accident 15 years ago and that Jonah tortured her for one night every year because she was the one that killed him. Molly wants to talk to her husband, but Sam and Dean convince her that he has moved on and now it is time for her to move on. Molly accepts this and dissolves into light as the sun rises.

For this episode = 2 humans and 2 ghosts, although the ghosts that die are also the same 2 humans that died in the teaser.