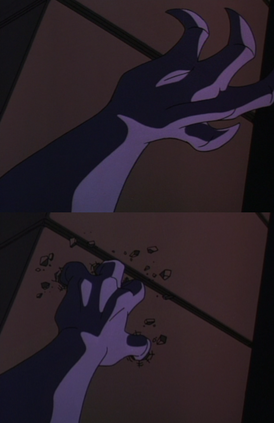 Scrub: Great... a real Space Hulk... I sure hope we don't run into any Genestealers.
Zael: Chin up, lad! Got Terminator Armor, after all!
Gideon: I seem to remember Genestealers having Rending Claws, Zael. This armor's about as protective as wrapping your dick with a napkin to fuck a chainsword...
— Space Hulk II
Advertisement:

What happens when your Natural Weapon is an Absurdly Sharp Blade.

In Real Life, animals use their claws for various purposes (hunting, climbing, grooming, digging, defense, etc.). However, over time, these claws grow dull and must be sharpened to maintain their usefulness.

Not so in the world of fiction. In many fictional cases, animal claws remain insanely sharp even after constant use. Moreover, these claws are so sharp that they are effectively natural swords able to slice through things that few (if any) real life animals could ever scratch. Werewolves, dragons, Mons, and other superpowered animal characters can be expected to use this trope.

Subtrope of Absurdly Sharp Blade. May overlap with Blade Below the Shoulder (the permanently-attached variant) and its subtrope Wolverine Claws, depending on whether the claws replace the entire hand (the former) or not (the latter). May have Audible Sharpness. These can end up as Cumbersome Claws if the character isn't careful about handling things.

El Tigre's claws are sharp enough to cut through an unobtanium robot.

El Tigre's claws are sharp enough to cut through an unobtanium robot.