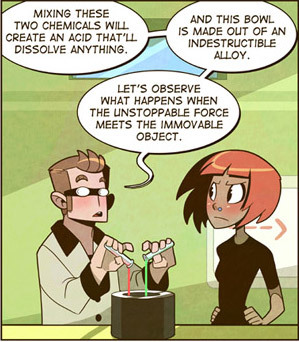 "Oh, you. You just couldn't let me go, could you? This is what happens when an unstoppable force meets an immovable object. You are truly incorruptible, aren't you? Huh? You won't kill me out of some misplaced sense of self-righteousness. And I won't kill you because you're just too much fun. I think you and I are destined to do this forever."
— The Joker, The Dark Knight
Advertisement:

"What happens when an unstoppable force meets an immovable object?" is one of the most famous formulations of a Yin-Yang Clash in the Western consciousness. As a result, it's become a Stock Phrase for describing any conflict between particularly strong or particularly stubborn individuals.

Some people try to claim that the unstoppable force would just bounce off and continue moving, albeit in a different direction (according to Newton's third law of motion, and conservation of energy and momentum... you know: science). For this reason, the question is sometimes phrased using the term "irresistible force" instead.

A similar concept appears in Japanese and Chinese media: the term 矛盾

, meaning "contradiction," is formed from the characters for "spear" and "shield." This is taken from a 3rd-century text that included a parable about a merchant who sold a spear that could pierce any shield, and a shield that could resist any spear; a customer pointed out the obvious contradiction, to which the merchant had no answer.

Please note: This article is about the actual phrase itself. If two really strong guys fight, and no one compares them to an immovable object and an unstoppable force at any point, then the example belongs in Ultimate Showdown of Ultimate Destiny or Yin-Yang Clash.