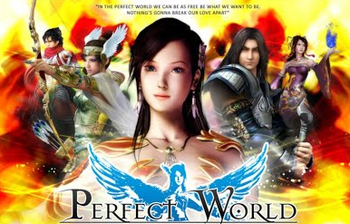 Perfect World is a Chinese MMORPG, developed by Beijing Perfect World. If you're looking at this page, chances are you're seeing ads for one of their other two MMORPG.
Advertisement:

It has been online for over two years and has already put out four expansions. Its main selling point may be the truly enormous level of customization available: there are five races with two job classes available for each, males and females, completely up-to-the-player stats, and more unique appearance, cosmetic, and fashion choices than most other games on the market. Like most MMORPGs, PW also boasts a huge open world.

As an added perk, all races can fly at level 30 (and one race immediately at level 1). There are also cash-shop items that enable flight from level 20 on, as well as (relatively recent) level-up rewards giving flying equipment around level 15 (but unusable until level 20).