Video Game / 16 Ways to Kill a Vampire at McDonalds 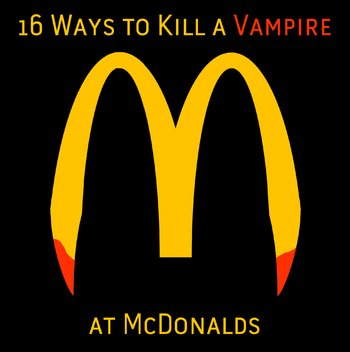 Fucking leeches are crawling all over this poor little town.
I can't show neck in a bar without someone tall, dark and anemic sidling up to me and staring at my breasts to keep himself from ogling my jugular.
— Lucy Sutton
Advertisement:

16 Ways to Kill a Vampire at McDonalds

is a interactive fiction game released in September, 2016. The game is available free online.

You play Lucy, a vampire hunter on her night off. She goes to McDonald's to enjoy some greasy food, and discovers a vampire slouching in a booth. The goal of the game is to slay the vampire before he exsanguinates the cashier.

The situation is complicated by the fact that Lucy isn't a fighter: her role on her vampire hunting team is The Bait. She lures vampires into traps so her teammates can slay them. So she can't confront the vampire directly and instead needs to be creative.

Gameplay is adventure game-ish. You have an inventory and use objects and talk to NPCs to progress. There are sixteen different ways of dealing with the vampire. Getting all the different ways unlocks special content.