Archaic Weapon for an Advanced Age 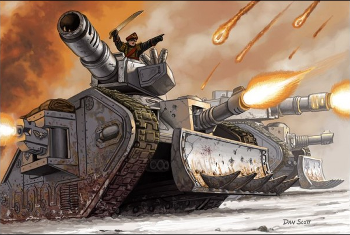 Drive me closer! I want to hit them with my sword!
"I mean, Jedi — as I've always said before — well, they've chosen a sword in a time of, you know, laser guns, so they'd better be damn good with it."
— Nick Gillard, stunt coordinator for the Star Wars prequel trilogy, Attack of the Clones DVD featurette
Advertisement:

There's a certain amount of cultural and symbolic weight to most historical weapons, accurate or not. They invoke a feeling of the Good Old Ways, and may be seen as more honorable, elegant, interesting, or simply cool. They're also traditional in many settings, especially for those that have roots in Medieval European Fantasy, such as Role-Playing Games.

However, even in settings where these weapons should be obsolete and out of place, they often show up and are shown to be just as effective, if not more so, than weapons that are modern to the setting.

This occurs with extreme frequency in Eastern RPGs, probably due to the genre's origins in Dungeons & Dragons. Even in Steampunk and Urban Fantasy settings, you will find swords, axes, spears, katanas, and all other manner of (seemingly, at least) anachronistic weaponry. It also appears in settings with Schizo Tech. It's even possible the character uses this because s/he Doesn't Like Guns or thinks Firearms Are Cowardly. Sometimes it will be justified with a Retro Upgrade (said weapon has become useful again because something's changed), Guns Are Useless, and/or by making it an Enhanced Archaic Weapon.

It's also Truth in Television to an extent. While it's true that the modern battlefield is dominated by guns, hand-to-hand and melee weapon combat training will likely always be a part of military curricula: guns can be cumbersome in close combat and melee weapons are much quieter for stealthy raids or taking out sentries, so the humble dagger and its modern derivatives will never go out of style. As well, officer's dress or parade uniforms may include a sword. It's also true that swords, spears, bows and arrows, etc. coexisted with guns on the battlefield for centuries before the gun was developed enough to became the dominant weapon it is now. And even when they were completely overshadowed by guns, it took even longer (as in, the second half of the 20th century) before all major powers stopped issuing swords to officers (except for the ceremonial swords used for special occasions).

They are often employed by heroes because Heroes Prefer Swords. Often a result of using the old technology in ways that were Not the Intended Use. Some science fiction authors who blend sci-fi and fantasy may have a mix of ray-guns and archaic weapons.

Super-Trope to The Straight and Arrow Path. Compare Break Out the Museum Piece, Older Is Better, Rock Beats Laser, and some forms of Improperly Placed Firearms. See also Elegant Weapon for a More Civilized Age.

JP mentions how swords can appear in sci-fi settings.

JP mentions how swords can appear in sci-fi settings.