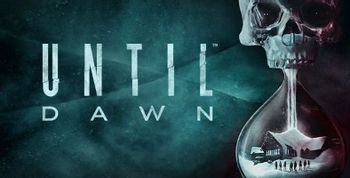 Until Dawn is a Survival Horror Adventure Game made by Supermassive Games and published by Sony. It was released on August 25, 2015 exclusively on the PlayStation 4.

Every year, a group of young friends travel to an isolated ski lodge deep in the mountains for their annual retreat. When a mean-hearted prank goes awry, two of the friends are driven out into the icy darkness and are never heard from again.

One year later, the remaining eight are invited to that same ski lodge to commemorate their friends' deaths. But when mysterious and deadly occurrences begin to happen, it quickly becomes clear that someone or something is out for blood... and not all of them might make it out alive.

Who will survive until dawn?

The answer to that depends on the player and the choices they make throughout the story, which can drastically affect the way events play out and how the characters react to each other. The player is given two forms of aid: a "Butterfly Effect" journal that catalogues the links between your actions and consequences, and collectible "Totems" that offer prophecies of potential futures. There are hundreds of possible story paths and endings: every character might make it out alive, everyone could die, or there may only be a handful of survivors..

The game was originally announced for the PlayStation 3 in 2012, intended as a showcase of Sony's new PlayStation Move system, but little was heard from it afterwards and many people suspected that it had become Vaporware. It finally resurfaced two years later with a heavily overhauled story, production values, and gameplay. The trailer can be viewed here,

a gameplay demo from Gamescom 2014 can be viewed here,

A spin-off game / tech demo for the PlayStation VR called Until Dawn: Rush of Blood debuted with release of the peripheral. It acts as a somewhat literal rail shooter as you ride through a carnival-themed roller coaster while dodging traps.

A prequel also for the PS VR titled The Inpatient was released in January 2018 which takes place during the massacre of the Blackwood Pines Sanatorium in the 1950s.

At the 2018 Gamescon, Supermassive Games announced a Spiritual Successor called The Dark Pictures Anthology, a series of standalone horror games beginning with Man of Medan which released in 2019, followed by Little Hope in 2020 and House of Ashes in 2021. The fourth entry and Season One finale, The Devil In Me, is planned for release in 2022.

Also in 2022, Supermassive released The Quarry, a surprise Spiritual Sequel even more closely patterned on Until Dawn.