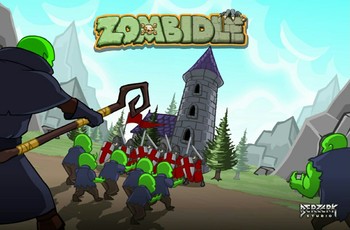 "Like the song says, good guys finish last, and in this case, they also finish homeless and on fire."
Tagline
Advertisement:

Zombidle is an online Flash Idle Game made by the developers Berzerk Studio.

The continent of Goodlandia is under attack by Bob The Necromancer and his horde of undead and demons, who plan to destroy the towns and castles of the good folk! The guards have united to stop him from destroying the kingdoms one by one before it's too late...

...by the way, you play as Bob the Necromancer and his undead army.

The "enemies" in the game are the houses of good folk, which Bob destroys to obtain skulls as currency to upgrade himself as well as his legions of hell. Along the way, he can collect orbs and items to boost his damage and minions further. Progress is made by destroying enough houses, and at the end of five levels, a "boss" in the form of a blacksmith's union will attempt to stop him in a Time-Limit Boss fight. Once the kingdom is razed, Bob will then be able to dispose of the king and his wizard.

This game can be played here

, on the iOS/Android, and downloadable here