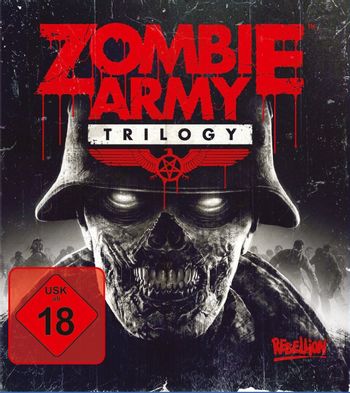 The original Sniper Elite: Nazi Zombie Army was a standalone expansion based on Sniper Elite V2, released in late February 2013. Its features include a 1-4 player co-op campaign, incredibly dense clusters of lumbering enemies, new weapons (including shotguns), all weapons from the original game and its DLC, and the stealth elements of the main game largely removed due to the sheer number of enemies you're facing.

Zombie Army Trilogy itself was released on March 6, 2015, and concludes the series. Or so we thought... a cinematic reveal trailer

Rebellion published the five part comic Zombie Army Last Rites in the Judge Dredd Megazine and the novel Zombie Army Fortress Of The Dead to tie in with the release of Dead War.

Tropes found in the original Zombie Army Trilogy include: