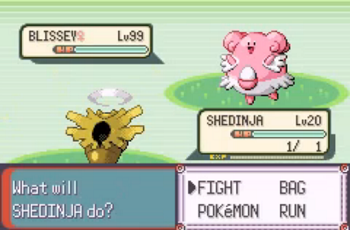 A character who dies from a single hit or other incident of damage. Needless to say, this rarely applies to bosses, unless they are of the Zero-Effort variety. In older video games, this was frequently true of the protagonist (though almost always with Video-Game Lives to compensate); nowadays, the Player Character is usually only a One-Hit-Point Wonder if the programmers/developers want the game to be Nintendo Hard.

As mentioned above, this is more common in older games (especially the Golden Age of Arcade Games), and part of what makes a game Nintendo Hard. Modern tactical shooters also use this feature as well, even if Instant Death Bullet itself also grates on the "realism" bit.

Some games will give the One-Hit-Point Wonder access to a Single-Use Shield, body armor, or other powerups that allow them to take extra hits, but they still count as examples of this trope, provided that the character does not start off with said method of taking an extra hit.

In some cases, this creates the bizarre effect of giving the Goddamned Bats more health than the player. Luckily, many games compensate for the player's virtually nonexistent resilience by ramping their attack power way up.

This situation can happen quite often in the case of RPGs involving enemies who like to use an incapacitating status effect and a single player character who can't recover from it without help. This is usually due to either being separated from their party due to a plot event, or due to a solo character Self-Imposed Challenge.

Rocket-Tag Gameplay has everyone in this situation, so that whoever manages to hit first will win. An Instakill Mook makes the character this even when it isn't normally.

Compare Untouchable Until Tagged (where a single failure to dodge dooms a character) and HP to 1 (an attack which turns characters into this). Contrast One-Hit Kill. If it's a mook whose One Hit Point is exceptionally hard to remove, you've probably encountered a Metal Slime.

Has nothing to do with a One-Hit Wonder, although it is sometimes referred to as such.