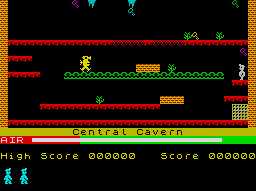 The opening level.
Manic Miner is an 1983 video game. Willy has discovered an automated, abandoned for untold centuries, mine in Surbiton.
Advertisement:

The good news is, the mine machinery has been piling up wealth which is there for the taking; the bad news is, it's still active and doesn't take kindly to intruders...

This game became controversial when a number of Bug-Byte programmers left to found Software Projects, and Matthew Smith used a contract loophole to take Manic Miner with him.

Manic Miner is also famed as the first ZX Spectrum game to feature a backing track alongside the sound effects, a feat previously considered impossible as the Speccy only had one sound channel. This was done by arpeggiated multiplexing: the tune and the effects were both played as a rapid staccato, and interleaved with each other. The title screen also features an attempt at two note chords using a similar method. The resulting rendition of The Blue Danube did not work quite so well.