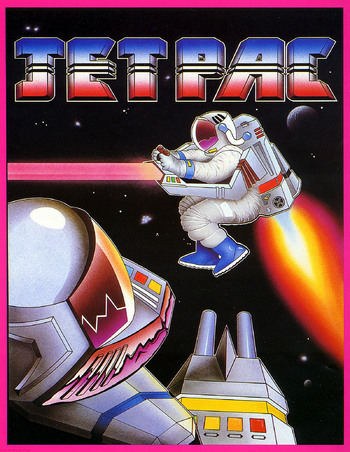 Jetpac is a ZX Spectrum, VIC-20 and BBC Micro video game developed and released by Ultimate Play The Game, better known nowadays as Rare, in 1983. It later appeared as an Embedded Precursor in Donkey Kong 64.
Advertisement:

In the game, Jetman has to first assemble his rocket (which comes in kit form), and then fill it with fuel before taking off to the next planet (where the procedure is broadly repeated). Along the way Jetman has to fend off the attention of intelligent (and not-so-intelligent) aliens, while making off with their valuable resources. It was followed by a sequel, Lunar Jetman, and later a further sequel, Solar Jetman.

Not to be confused with the unrelated (apart from them both containing jet packs) game Jetpack.