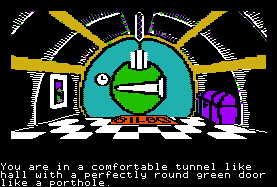 Starting location of the Apple ][ version.
"Congratulations! You are about to play the most sophisticated game program yet devised for any microcomputer."
— instruction manual from The Hobbit for Commodore 64
Advertisement:

The 1982 adaption of The Hobbit into the Interactive Fiction format, written by Philip Mitchell and Veronika Megler of Beam Software, and published by Melbourne House for the ZX Spectrum, and later ported to the Commodore 64 (1983), IBM Personal Computer (1983), and several other home computers.

Their ambition was to cram all the events and places of Tolkien's Middle Earth into a machine with 48K of memorynote For reference, the tiny screenshot on the right of this page is 51K in size. Yes, the entire game had to fit into a smaller space than one screenshot of itself. Put that in your Skyrim and smoke it. They failed. But they failed in such bold and interesting ways that the game still feels futuristic today.

Every character and object in the world is simulated simultaneously, with non-player characters pursuing their own goals under their own AI (in modern terms: The Sims in the world of Skyrim.) The computer does not know which character is the player, and applies its rules impartially to all.

This, predictably, leads to chaos. Plot-critical characters are devoured by wolves before you meet them. Thorin stops to sing about gold while surrounded by murderous goblins. Gandalf storms about the map like a slightly-senile force of nature, seizing vital things from your inventory, examining them for one turn, casting them on the ground and rushing off in pursuit of a new shiny object. On at least one occasion, the player arrived in Rivendell to find Gandalf holding a green door and Dead Elrond! The design was simply far too ambitious for the computers of 1982 (it is arguably too ambitious for modern computers.) Still, for sheer inspirational ambition, it makes games five orders of magnitude larger seem small.

The Hobbit is long out of print, but can be easily found on emulation sites. See also the Wilderland Project

, which helps elucidate the great whirling chaos going on in the game by displaying the state of objects and animals, the current positions of the latter, and a log of what all the other creatures do while Bilbo is in one place. In 2015, fan site World of Spectrum produced a version for the 128K Spectrum with enhanced graphics. Discussion (and download link) here