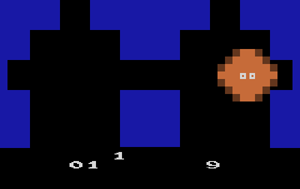 An Atari 2600 Action-Adventure game from 1982, and quite possibly the Ur-Example of the Survival Horror genre. Not violent, but very scary given the graphics of the time.
Advertisement:

You play a disembodied pair of eyes wandering around a darkened four-story house. You're there to find the three pieces of an urn that once belonged to a man named Zachary Graves. But the house is haunted by Zachary's ghost, and occupied by tarantulas and a bat. If they touch you, you'll be 'scared to death' and lose a life. You have 9 lives.

The house is completely dark, but you have an infinite number of matches to light a small area around you. The match works for a limited time and another one has to be lit. The match also goes out when there's a monster in the same room with you. With a match lit, you can find items in the rooms: A master key to open locked doors, a scepter to protect you from the monsters, and the urn pieces. You can only carry one of these at a time (the urn assembles as you collect the pieces, and is considered one item).

There are nine Difficulty Levels, ranging from Easier Than Easy to Nintendo Hard. At level 1, there are no doors, the walls are lit, and you can see if a monster is in another room. At level 2, the scaring starts. It's completely dark, and the rooms are separated by doors, so you don't know if there's a monster in the next room. Even if you stand still, a monster could wander in from any direction. Higher levels lock some of the doors, have three tarantulas instead of one, make the monsters more aggressive, make the bat steal your item, speed up the monsters, make Zachary's ghost immune to the scepter, and let the other monsters move through locked doors.

No relation to the 4K TRS-80 Text Adventure Haunted House, nor the Gottlieb pinball table.

The game was remade for the Wii and Xbox LIVE Arcade, and another re-imagining of sorts called Haunted House: Cryptic Graves