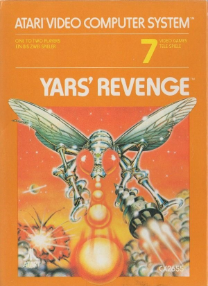 Yars' Revenge is a Top-Down View Shoot 'Em Up for the Atari 2600. Written by Howard Scott Warshaw and released by Atari in 1982, it became the 2600's best-selling original title.
Advertisement:

An included comic book sets up the plot: Yars began as ordinary Earth houseflies, who hitched a ride aboard a human spacecraft on a mission to the Razak solar system. The mission ended in catastrophe, but the flies escaped and mutated into super-beings that built advanced civilizations on three of the Razak system's planets. To protect themselves, they created a BFG called the Zorlon Cannon. But before the cannon was finished, an enemy called the Qotile attacked and destroyed one of the planets. So now the Yars must get their revenge by destroying the Qotile.

The game itself started as a port of Star Castle, and still has some of its gameplay elements, such as the main enemy hiding behind a shield, and a smaller enemy chasing you around. You play a Yar, a giant fly that shoots energy missiles. On the right side of the screen is the Qotile, surrounded by a shield. You can shoot away the shield, or come right up to it and eat it. Once you have destroyed enough of the shield, you call in the Zorlon Cannon. Different variations of the game have different methods for calling the cannon. Once you have called the cannon, you position it by moving the Yar up or down. The Qotile is always moving up or down, and the Zorlon fires a Painfully Slow Projectile, so you have to Lead the Target carefully. Then you fire it, and get out of the way or you will kill yourself with your own cannon.

The Qotile cannot directly harm younote In fact, touching it is one of the ways to call the Zorlon Cannon, but it does launch a Destroyer Missile that chases you around. From time to time, the Qotile will also turn into a Swirl, that fires at you at high speed. In the center of the screen is a Neutral Zone, where you are safe from the Destroyer Missile, but not the Swirl (being that it is a planet-annihilating weapon), and where you cannot fire. And that includes not being able to fire the Zorlon Cannon.

Alternating levels have different shield types. Higher difficulty levels cause the Qotile to become the Swirl more often. But the Red Swirl is always the swiftest and deadliest.

An anime-styled Rail Shooter re-imagining by Killspace Entertainment that made the Insectoid Aliens more humanoid was released on Xbox LIVE Arcade and PC on April 13th, 2011.

Another re-imagining by Adamvision Studios in the style of their line of Recharged Atari 2600 titles, titled Yars: Recharged, was announced by Atari and was released on PlayStation 5, Xbox Series X|S, PlayStation 4, Xbox One, Nintendo Switch, PC via Steam and Epic Games Store, Google Stadia, and Atari VCS on August 23, 2022.

In a bizarre Where It All Began Book End, a former Atari employee has created what Warshaw said was impossible

The 2011 re-imagining (called "Yar'snote The placement of the apostrophe is important Revenge") provides examples of: