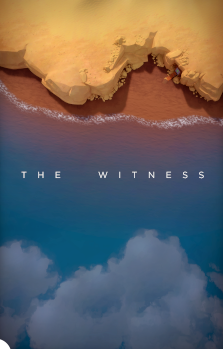 The Witness is a 2016 adventure/puzzle video game by Jonathan Blow, creator of Braid.

The game has you control an unnamed, unseen Player Character stranded on an island filled with beautiful vegetation and buildings but completely devoid of human life. Scattered across the island are audio recordings offering the esoteric backstory of this place and numerous puzzles that must be solved in order to progress further into various sections of the world. The player must ultimately activate seven of eleven total beacons in order to gain access to the island's mountain and discover just what this place is and what happened here.

The Witness began development shortly after the release of Braid; in all, seven years were spent making the game, resulting in a near-four year Schedule Slip for its release date. The game itself is a Call-Back to adventure games such as Myst, albeit through Blow's particular lens.

Not to be confused with the 1983 Interactive Fiction game from Infocom with the same name.

Tropes featured in The Witness include: