I Can't Reach It 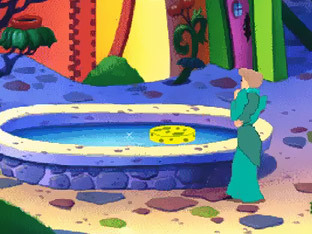 Options not presented: making waves, throwing rocks, using a stick, draining the pool.
"If I had the slightest inclination to strain myself, I could probably reach it. However, I'm sure I can drag this out into a longer, yet more satisfying experience."
— Sam, Sam & Max Hit the Road
Advertisement:

The combination of Insurmountable Waist-Height Fence and Informing the Fourth Wall, found primarily in puzzle/Adventure Games. A character is incapable of doing something which would theoretically be possible in the real world for somebody in the same situation. Common manifestations of this occur while reaching for and taking objects, or while attempting to use non-useable objects.

This trope can overlap with Moon Logic Puzzle, Solve the Soup Cans, and Alphabet Soup Cans, where a player cannot advance until a particular puzzle is solved. Compare You Can't Get Ye Flask for the text-based equivalent. There is no taking a third option. The player must solve the problem as the developers intended or simply go somewhere else.